The FDA Laws About Animals in Restaurants Explained

The Food and Drug Administration or FDA is a United States governing body that’s part of the Department of Health and Human Services. Usually, you hear of the FDA as it pertains to the health and safety of people food and pet food, but the FDA also has laws about animal access in restaurants. What are they?

The FDA laws currently prohibit animals in restaurants unless the animal is a service dog. That said, already 17 states throughout the United States have passed laws permitting dogs to sit on an outdoor restaurant patio with their human companions for a bite to eat.

If you still have more questions, don’t worry, as we’ve got the answers. In this extensive article, we’ll break down all the current FDA rules so you can ensure you’re on the right side of the law when operating your restaurant or café!

What Does the FDA Say About Animals Being Allowed in Indoor Restaurants?

To reiterate, the FDA is the governing body in the US that dictates food and retail service codes. The codes vary by state; you can read up on the information for your own state here.

Those state codes do not go into detail about animal allowances for indoor dining, but that’s because they don’t have to. As we mentioned in the intro, as of this writing, the FDA prohibits animals in any foodservice establishment.

A foodservice establishment includes the following:

The reasons why the FDA does not permit animals in indoor restaurants are a topic that we’ve covered extensively on the blog. People may be allergic to animals, in which case, dining at the establishment would be quite an unpleasant experience if there’s a slobbering dog six feet away.

Others fear dogs and wouldn’t want to be seated near one. Even those who like dogs might argue that canines have no place in a restaurant.

There are many hygienic implications of allowing dogs in restaurants that can’t be ignored even if mentally and physically, the presence of dogs might be beneficial.

The dog would have to be taken outside regularly to avoid having accidents. Even still, in loud or stressful situations like a busy restaurant floor, accidents could still happen.

Now, we must note that the FDA does have exceptions to its rule, but only one.

The exception is if your dog is deemed a service animal, the dog has more leeway.

You’ll recall if you read the blog that the Americans with Disabilities Act, aka the ADA, is a civil rights law passed in 1990 that protects the disabled against discrimination.

Per the ADA website, service animals “are defined as dogs that are individually trained to do work or perform tasks for people with disabilities. Examples of such work or tasks include guiding people who are blind, alerting people who are deaf, pulling a wheelchair, alerting and protecting a person who is having a seizure, reminding a person with mental illness to take prescribed medications, calming a person with Post Traumatic Stress Disorder (PTSD) during an anxiety attack, or performing other duties.”

As that definition alludes to, there are many types of service animals, but none are pets. You can’t take a common household Golden Retriever, slap a vest on him, and call him a service animal.

Service animals undergo intensive training and are there for a reason, which is why the ADA and thus the FDA will allow service animals indoors in a place that serves the public.

When it comes to restaurants, service animals are permitted even though a local or state health code (or both) would usually prohibit it.

Non-service dogs though do not get the same tolerance.

What If You Own an Animal Café? Then What?

What if you own a dog café or–more popularly–a cat café? The above laws as mandated by the FDA make it sound like you’re not allowed to have animals on your premises.

Well, although we couldn’t find any information to confirm this, clearly, animal café owners operate under a different set of laws.

Although an animal café would still count as a foodservice establishment, allowances seemingly are made for these café owners so they can have dogs or cats inside the building.

That’s not to say that the law is lax on animal café owners. Far from it!

We’ve talked about this on the blog before, but as the owner of a cat café or dog café, your establishment is subjected to very stiff and rigorous health inspections.

Your café must be clean from top to bottom and inside and out, and that includes the main area where people dine and pet the animals as well as the kitchen and any other areas that customers don’t see, such as storage areas.

The food preparation area must be kept pristine, and no rodents must ever be allowed in the building.

Further, the area where the animals sit and play and the area where customers enjoy food and drinks must be kept separate, ideally through different rooms.

Animal café owners must also keep the animals living there healthy. Each animal must have a clean bill of health and be current on its vaccinations.

When you consider that many animal cafés have as many as 10 or 20 animals on the premises, it can be difficult to ensure current veterinary care for all, especially when you’re a busy café owner.

Plus, if you read our post about the costs to operate a cat café, then you’ll recall how expensive it is to keep up with the vet bills for that many animals.

You can see where animal café owners can get their establishments shut down. It happens all the time.

Now, you’ll notice that the FDA rules say nothing about dogs being allowed outdoors at a restaurant such as a patio area.

That’s not a loophole, nor is it an omission.

When a dog is kept outdoors, many of the hygienic risks are minimized. The dog is not sharing space with kitchen staff, and the animal would be able to freely urinate or defecate without the risk of food cross-contamination.

According to Michigan State University’s Animal Legal & Historical Center, as of 2020, up to 17 states in the US have passed laws that permit dogs on outdoor restaurant patios. These laws have come about through either administrative regulation or the passing of state laws.

Even still, a few of the laws do mandate that a local government unit pass an ordinance, which may or may not have happened yet.

The states with laws in effect are as follows:

These states only have regulations permitting dogs to eat outdoors at a restaurant:

The remaining states have no rules either way. This doesn’t mean that outdoor patio dining with a dog at a restaurant would be prohibited, but it wouldn’t be approved yet either.

The FDA laws about animals in restaurants currently bar four-legged friends unless they’re service animals. Outdoor dining is a different ballpark entirely, with many states across the country enacting rules allowing outdoor dining with dogs and more still that could follow suit! 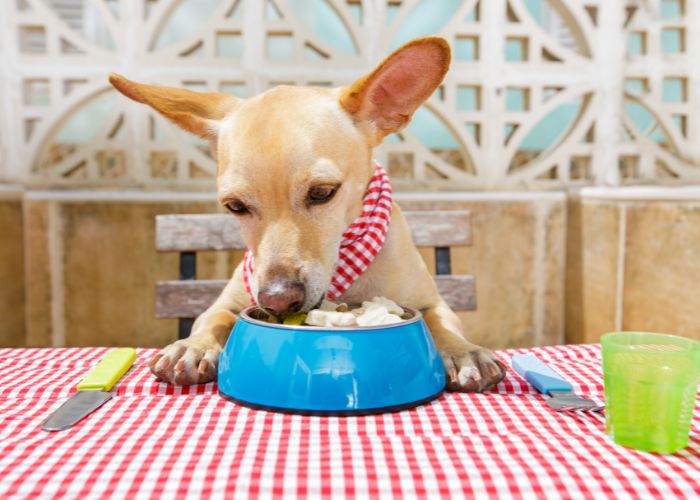 How to Make a Restaurant Dog-Friendly (Ultimate Guide)

You’ve owned a restaurant for several years now and done quite well for yourself. After reading this blog and realizing how profitable and popular dog-friendly

Although no state can legally allow dogs into the indoor areas of a restaurant (unless the animal is classified as a service dog), as for

Your experience in the restaurant industry has finally inspired you to take one giant leap towards opening your own establishment. You also adore cats, so