The Top Animals That Are Often Allowed in Restaurants

When we mention an animal café, does a cat café spring to mind first? That’s fair, as these are still the most popular cafés of their time more than 20 years later. Yet depending on where you visit, an assortment of animals is allowed in restaurants and cafés. What are they?

Here are 8 animals that are often allowed in restaurants and cafés:

Wait, hedgehogs? Raccoons? That’s right! Keep reading for more information about the restaurants and cafés that welcome exceptional animals such as these. You won’t want to miss it!

If you read our recent post, then you became acquainted with dog cafés. For those who by chance missed that article, allow us to explain how dogs have become a welcome sight in restaurants and cafés.

Beginning with restaurants, dog-friendly restaurants abound, especially throughout the United States. These are often outdoor establishments where you can sit and enjoy the fresh air and delicious food. The best part is that you get to keep your dog by your side!

If you’re not sure if a certain dog breed is right for you, playing with them at a dog café is a great chance to get acquainted!

Of course, animal cafés wouldn’t have made the major splash that they have if not for cat cafés. These are the original animal cafés that originated in Taiwan in the late 1990s. Japan took the cat café trend and ran with it, and that’s how these cafés became as popular as they are.

Today, you can find cat-friendly establishments literally all over the world. In Asia, the most popular spots for cat cafés are Thailand, Taiwan, South Korea, Singapore, and Japan. The United Arab Emirates has some cat cafés too.

Over in Europe, if you’re passing through Sweden, Slovakia, Russia, Romania, Poland, Netherlands, Lithuania, Italy, Belgium, or Austria, check into a cat café or two on your travels. The United Kingdom, United States, and Canada also have more than their fair share of cat cafés as well.

Cat cafés usually feature cat-themed everything, from foamy lattes with triangular cat ears to décor. Of course, the best part is the live cats that roam the playing area! You can pet them or scratch behind their ears until they purr.

If you want to enjoy more than a bit of quality time with a feline friend, you’re often allowed to adopt the cats that live at a cat café.

When it comes to sweet and cuddly pets, reptiles are understandably at the bottom of the list. These cold-blooded creatures aren’t exactly cuddly, but they can be as sweet as any other pet. Plus, the bonds you can build with a reptile are very much valid.

That’s why Cambodia has its own reptile café that opened in 2018. The owner got permission from the Ministry of Forestry, Fisheries, and Agriculture before his establishment came to fruition.

The reptiles featured at the café are spiders, iguanas, snakes, and turtles. You don’t exactly get to play with the animals (which is fair, as not many people would want to snuggle up to a spider), but you can photograph yourself with them. Plus, this café provides an educational experience, as you can learn more about any of the reptiles living at the café!

Reptile cafés certainly haven’t caught on to the same extent that other animal cafés have, but never say never! After all, if there’s an audience for something, even a niche audience, then the opportunity is always there.

Perhaps your ideal pet is more of the avian variety. If so, then you’ll want to plan a future trip to Japan. Throughout the country, you can visit a selection of bird cafés. These are great places to visit if you wish to see hawks, falcons, parrots, owls, and other feathered friends up close.

Okay, but aren’t these animals dangerous, you’re asking? They certainly can be. However, since Japan has been in the animal café game for decades now, they always take all the extra precautions to make your experience a safe, enjoyable one.

That’s why the birds featured at the café are exceptionally trained. Even in the hustle and bustle of the daily café environment, the birds will never attack or misbehave.

You can’t pet the birds at a bird café, but you can witness the staff take the birds out and feed them. Plus, photographs are usually allowed, but make sure you ask before you whip out your camera!

It’s hard not to look at a cute, fuzzy bunny rabbit and not fall in love, right? If you want to get your fix, Japan has rabbit cafés in addition to their cat cafés and bird cafés. Other parts of the world might catch onto this trend as well because rabbits are a very appealing pet to many.

Unlike a cat or dog café where the animals roam freely in their designated zones, rabbit cafés usually require the rabbits to remain in their enclosures or cages while customers visit. The customers can walk by the rabbits and perhaps photograph them.

In some instances, you might be able to take a rabbit owned by the café for a walk around a nearby location. Yes, that’s right, rabbits like going on walks just as dogs do, even though you don’t usually see any in your neighborhood!

In Seoul, South Korea, a sheep café called Thanks Nature Café opened its doors in 2011. This was historically significant since the café is the first of its kind. As of now, it appears to be the only sheep café, which is a shame!

The sheep that live there, at least as of 2018, are named Honey and Sugar. Unlike the rabbit and reptile cafés we’ve discussed to this point, Thanks Nature Café welcomes its visitors to play with Honey and Sugar, the two sheep.

Customers are allowed to pet the animals, take photos with them, and even feed the sheep. When you feel hungry or thirsty, you can sip on lattes with fluffy foam that look like sheep (complete with little sheep faces) as well as enjoy ice cream and waffles that resemble Honey and Sugar.

Considering how adorable the concept of a sheep café is, we hope it catches on elsewhere in the world sooner than later!

As of this writing, Thanks Nature Café is still open.

Although not a pet, per se, hedgehogs have still captivated us due to their undeniable cuteness. If you’ve always longed to get closer to hedgehogs besides what you can see of the animal at the zoo, Japan had at one time a hedgehog café.

Since hedgehogs have defensive quills, petting the animal is out of the question. However, the café, which opened in 2016, still attracted its fair share of visitors due to their overwhelming curiosity regarding the café’s subject, the humble hedgehog.

This animal café did get some pushback because people wondered if the hedgehogs were being adequately cared for. It’s unclear what the fate of the café is or whether hedgehog cafés will become common in the future.

The last type of animal you might spot in a restaurant or café is a raccoon. That’s right, raccoons!

Somewhere along the decades, the reputation of raccoons shifted from unwanted creatures that picked through your garbage to adorable, companionable pets. Since enough people own raccoons, it only makes sense that raccoon cafés have spread as a result.

These types of cafés are more common in South Korea and so far, not elsewhere on the planet, but that can always change. The café in Seoul is appropriately called Raccoon Café and is still in business as of this writing.

You must take your shoes off when you arrive at Raccoon Café and wear a pair of slides or house slippers provided to you by the restaurant. You must also put your possessions in a locker.

Raccoon Café has food and drink, but it’s the raccoons that most people come here for. The animals are separated via a glass wall. Interestingly, it’s not only raccoons living at the café, but dogs too. Upon entering, you can pet both species.

The raccoons have their own play gym where they can be seen exercising or just chilling. The Raccoon Café does warn its customers that the raccoons can scratch and bite, which is something you should keep in mind if you visit!

Animal cafés are most beloved for cats and dogs, but those aren’t the only animals in town. Around the world, you can visit cafés dedicated to birds, rabbits, sheep, and even unconventional creatures such as raccoons and reptiles. If you get the chance to go, you certainly should! 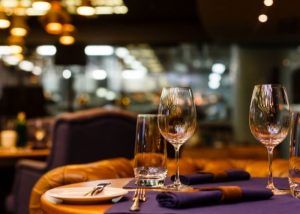 Should Dogs Be Allowed in Restaurants? The Pros and Cons

Should Dogs Be Allowed in Restaurants? The Pros and Cons Our canine companions are so important to us. They’re our best friend and members of the 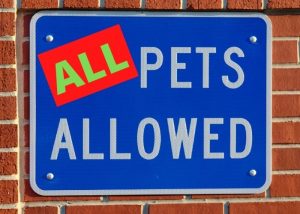 6 Reasons Why Pets Should Be Allowed in Restaurants

For many people, our pets are our entire lives. They make each and every day incredible. Leaving them behind at home is difficult for a 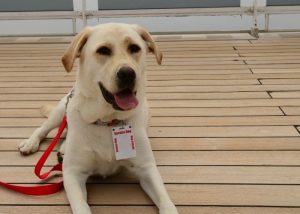 Can All Service Animals Eat in a Restaurant?

You have a service animal who’s a big part of your everyday life. You haven’t gone to a restaurant in a long time, but tonight,