What Are the Different Departments in a Restaurant?

Restaurants aren’t like offices, but they do have departments. When hiring a human resources or HR manager for your establishment, you’ll need some defined hierarchies to follow, and departments will surely come in handy. What are the different areas of a restaurant staff?

Restaurant staff can be divided into the following departments:

In this guide, we’ll describe each of these five restaurant departments in detail, explain which staff is included in each group, and talk about what their job responsibilities are. You’re not going to want to miss it!

The 5 Departments in a Restaurant

For instance, at the very bottom of the totem pole, so to speak, would be your dishwashers. To fulfill this role usually requires very little if any prior restaurant experience.

Even still, dishwashers serve a significant role in the kitchen, as they keep the dishes sparkling clean so the next set of customers can sit down to fresh cutlery, plates, cups, and bowls.

Within the same level on the hierarchy would be the helpers, who also require little prior experience before being hired for this role.

Atop them would be the commis chef or Chef de Partie. As a section chef, the commis chef might cook or help with dish preparation. They might also work with other more experienced chefs.

Commis chef roles are usually assigned according to their rank, which rises in increasing levels, such as level one or level two. The former role is a more advanced position than the latter. A hotel management background is common of commis chefs, but not exclusively.

Above the commis chefs are your sous chefs, who usually have a decade or more of kitchen experience as well as a bachelor’s or master’s degree in hotel management, hospitality, food science, or a similar area of study.

The most important chef in the kitchen is the executive chef or head chef. They boast at least 12 years of experience in hospitality and foodservice. Their job responsibilities entail finely preparing menu items, approving dishes before they go out to customers, and even adding to the menu.

The second restaurant department encompasses your managerial staff. The employees in this sector don’t prepare or serve the food, but their involvement is still integral in creating a positive customer experience that makes customers return to your restaurant again and again.

These are the categories for managerial staff employees: storekeeper, cashier, and restaurant manager.

A storekeeper, despite that your restaurant is not a store, is still needed to keep your restaurant moving smoothly along. The storekeeper’s duties are to distribute products, both edible and non-edible, and to track orders as they come in or go out.

They’ll often work with the restaurant manager, especially in areas such as invoice reconciliation. This entails comparing the restaurant quantity against the quantity on the invoice to ensure everything matches.

Storekeepers possess accounting experience, likely at least a bachelor’s degree in areas such as finance or business. They have two to three years of experience in their role to be suitable for restaurant work.

The cashier uses point of sale or POS software as well as cash registers to produce bills for all the customers and then secure the transaction. They’ll count cash and make change, process credit cards and debit cards, and sort gift card payments as well.

Restaurant cashiers don’t just stare at a computer all day. They also have face-to-face interactions with customers at the restaurant. For instance, they’ll likely come to collect a customer’s bill with their credit card or cash payment included so they can process it.

They train and onboard new employees and might create or enforce company policy. If a customer has a bad experience at your restaurant and asks to see the manager, it’s the restaurant manager who will come out and take care of the issue.

Restaurant managers will sometimes patrol the dining floor and ask customers about their experience to ensure everything is up to par.

The best restaurant managers have a management graduate degree, either a bachelor’s degree or a master’s degree. They also have at least five years of experience in this role or a related role.

Outside of education and experience, the temperament of the restaurant manager is crucial to excelling in this role. The manager must be a people person through and through.

Next up is the floor staff, which includes the gatekeeper, housekeeper, waiters and waitresses, and captain.

As some of the most visible people in your restaurant, it’s not surprising that they’re sometimes referred to as ambassadors. After all, the floor staff is often the first employees your customers interact with and thus shape a customer’s initial impression of your establishment.

Restaurant gatekeepers are also known as maître d’s or greeters. They stand by to say hello with a smiling face and a bright presence to anyone who passes through the doors of your restaurant. In this role, a gatekeeper doesn’t require prior restaurant experience, nor do they often have very advanced college or university degrees.

The housekeeper is higher on the floor staff totem pole. They’re in the front, the back, and the middle of the restaurant, taking stock of what’s needed and where. For instance, if a customer needs a bottle of ketchup or an extra napkin, the housekeeper either procures these items or gives them to the waitstaff to deliver.

Housekeepers usually have at least two years of experience and a background in hospitality to excel in their role. 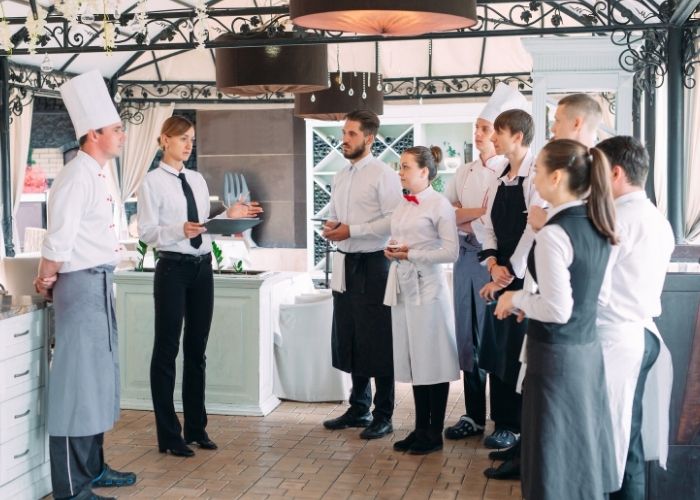 Above housekeepers are the waiters and waitresses, which are also known in some establishments as stewards and stewardesses. The duties of the waitstaff are to guide customers to their seats, hand them menus, take their orders, and then relay those orders to the kitchen staff in the back.

The waitstaff will sometimes deliver a customer’s order, and they’ll typically be the ones to put the bill on the table as well. In some instances, they might process the bill, but that role can also be left for the restaurant cashier(s).

Most restaurant waiters and waitresses have two or more years of experience.

The captain is the most experienced person in the department with five or more years of experience.

There’s only one role for bar staff to fulfill, and that’s the job of bartender. Whether your restaurant serves alcoholic beverages or creative non-alcoholic spirits, bartenders whip up fresh beverages that accent and complement the meals your kitchen staff painstakingly prepare.

Watching bartenders do their work is often dazzling stuff, as they make it all look so effortless. Bartenders are friendly and attentive. They listen well and are willing to go above and beyond for the customer experience, such as customizing drinks.

Most bartenders that work at restaurants have at least three years of experience in this department. They’re usually graduates of a bartending course.

That brings us to the fifth and final restaurant department, delivery staff. Not every restaurant has delivery staff, but most do considering that delivery is a popular means of enjoying restaurant food, especially since the COVID-19 pandemic.

In the delivery department are the delivery drivers. As a delivery driver, you receive access to a company car. When an order is up, you safely transport it to its destination. You’d ring the doorbell of the customer, give them their order, and process payment if that wasn’t done back at the restaurant. Then you’d return and do it again until your shift ended.

Delivery drivers must have a valid driver’s license. In some establishments, rather than use a company vehicle, the drivers might have to use their own car, so vehicle ownership would be another requirement.

Even some of the lower roles on the totem pole are important.

The different roles of a restaurant must all be prioritized to the same degree, as the roles are cogs in the wheel that altogether allow the wheel to rotate. 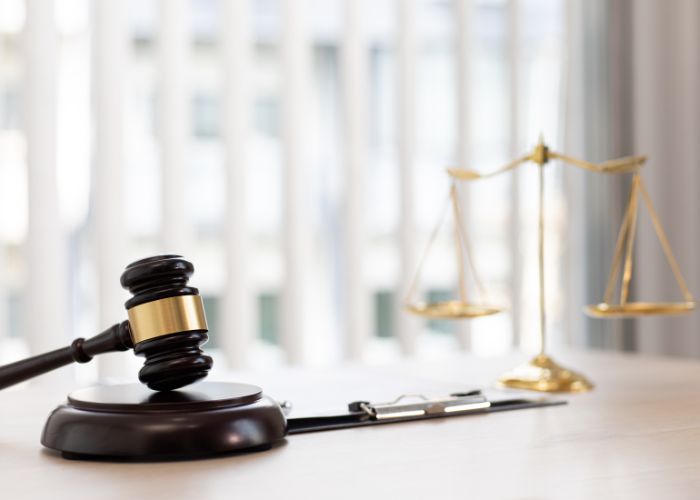 The FDA Laws About Animals in Restaurants Explained

The Food and Drug Administration or FDA is a United States governing body that’s part of the Department of Health and Human Services. Usually, you 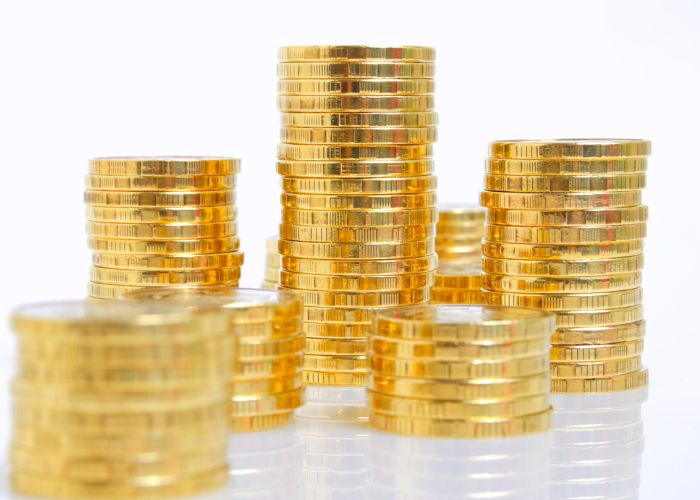 Your experience in the restaurant industry has finally inspired you to take one giant leap towards opening your own establishment. You also adore cats, so 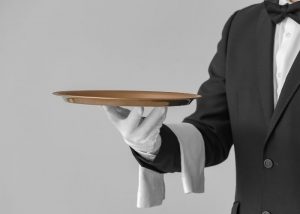